What is the injection blow molding process? 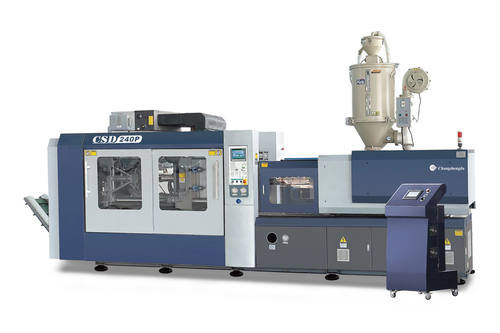 The rotating table returns to its starting height and the injection pin clamp and the blow mold clamps close after the rotation has been completed. In this system, the heated particulate is captured and blown off the core rod, while a new particulate is injected into the cavity.The heated thermoplastic parison is lifted off the metal core rod by the rotating horizontal table, and is molded on the plastic inside of the closed blow mold cavity by air or some other gas. Finish, or threaded portions of the parison that are formed at injection parison stations are not blown out of the blow mold tooling, but are held in the blow mold tooling to preserve their design dimensions. By using blow air pressure, only the injected portion is blown off the metal core rod.By blow molding, the moldeable product is cooled after it is formed, so that its dimensions and shape remain the same. The clamps open vertically after the blown product has cooled properly and the parison injection molding has been completed. The horizontal rotating table then rises to its predetermined set position, rotates either 90° or 120°, and carries the new injection molded parison to the blow mold station, the blown product to the strip or eject station, and the core rods free of product to the parison inject station.

Once the horizontal rotating table reaches its predetermined position, it drops vertically downward. The parison inject clamp, blow mold clamp, and stripper all close automatically when this takes place, enabling the formed product to be packaged or strewed into position for secondary operations like decorating, assembly, and treatment. It is now the end of the process.Using a triple-station injection blow molding machine, this procedure is continuously repeated. As an example, a four-station injection blow molding machine could be equipped with a safety check of the core rods at the fourth station to ensure they are clean and free of any product, or an air chamber that would condition the core rods. For machines capable of blowing polyethylene terephthalate or polyethylene naphthalate-based containers, this holds particularly true. During the fourth station, the blown containers can also be flame heated and decorated. We will discuss condition and decoration more extensively in the chapter on processing.